Alright! Here I’ll be documenting my journey to build smart aerial robots. I’ll be breaking down the steps for you to follow if you want to make your own.

Check out this MOOC to learn how to simulate quadcopters like I did above!

Elsewhere on this website I talk about (physical) urban mobility and how flying cars could be a good solution for certain segments of the grand challenge. I also review and comment on the super feasibility study done by Uber Elevate.

So, hang on, why don’t we just use helicopters or make them cheaper? If you’ve done any engineering you’ll know that helicopters are diabolically difficult to design and manufacture, not very intuitive to control and extremely noisy. They are also comparatively slow and short in range, which is why there’s been a lot of work on tilt-rotor architectures. Tilt-rotors swing between a helicopter and an aircraft – resulting in rather gorgeous aircraft like the (wildly over budget) V-22 Osprey, by rotating the prop-fan similar to my diagram  at the head of this article. See page 27-32 of the Uber report for design considerations of different vertical take off and landing (VTOL) aircraft. 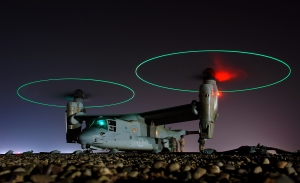 It turns out that for micro and small vehicles, quad-copters powered by electric motors (most drones you see on the high street) are a simple and effective VTOL architecture. They could cover parcel delivery drones for medical supplies up to 2-3 passengers intra-city. They are nimble, and after decades of technological advances in electric motors, batteries and lightweight materials quite cheap to make. They are also fairly easy to control because they often contain many planes of symmetry, and their safety can be amplified by adding more motors (Volocopter has 18!).

So, to put myself in their (baby) shoes, I want to make my own quad-copters, and see how smart and useful I can make them. After doing some of the MOOCs here I really enjoyed watching my simulated quad-copter following my instructions and moving around in the MATLAB figure window, and I thought I’d like to see it in real life.

After looking around for a quick-and-dirty first project, I came across a way to allegedly make one’s own programmable quad-copter for under $200 using a Raspberry Pi and some gear from the awesome Erle Robotics. For those of us who are mainly working in the worlds of Linux and python this should* allow us to quickly start programming as Raspbian is Debian-based and ROS (Robot Operating System!) which Erle uses has a python library called rospy.

*we’ll see about this later

Get your hands on a Raspberry Pi Zero W, make sure it boots with Raspbian and connects to WiFi. I wrote a quick piece on doing this which should hopefully fast forward you through common issues.

I believe Pi can fly